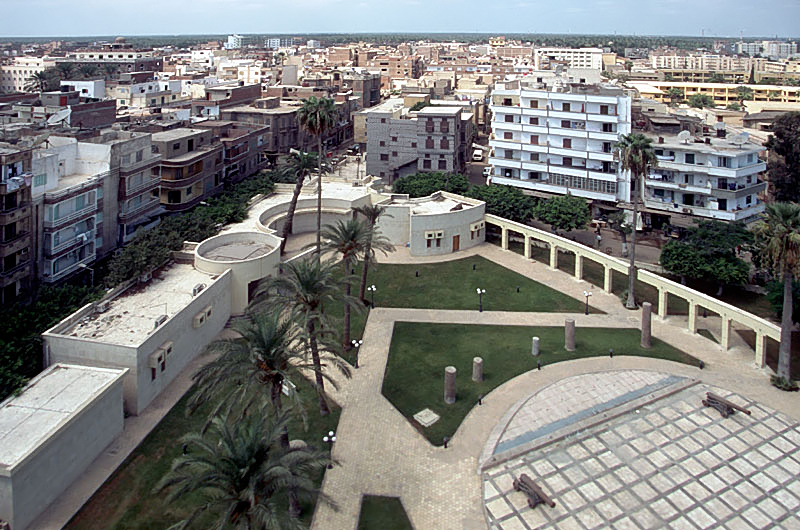 Fr. 12 km from the mouth of the western branch of the Nile to the sea and o 65 km east of Alexandria Rosetta (Rashid, dim. erraszid) is often called "the city of hundreds of thousands of palm trees". There are charming ones in the village, recently renovated historic cottages, inns and mosques, decorated with beautiful stonework and woodcarving.

Rosetta is many centuries older than the greater and happier Alexandria. The first settlements were established here during the protodynastic period. The city was then called Chito and survived under this name until the Ptolemaic times. Then they were referred to as Poulbotine from the temple of Poulbotinium in honor of Queen Cleopatra, and in Coptic times – Rasit, and then Rashid. The European name is derived from a rose (in Latin – rosa).

W 853 r. The Abbasid caliph ordered walls to be erected on the site of a Ptolemaic city. W 1249 r. crusade leader Saint Louis IX of France conquered Rosetta. When the Crusaders were driven out of Egypt, sultan al-Ghouri built a castle, and in the city he founded many houses and mosques under the rule of the Ottomans from the beginning of the 16th century. Rosetta has turned into an important commercial port. Rosetta was a port until the Turat al-Mahmudijya canal was built (1817— 1820), then its importance diminished, and the people took up fishing, farming and crafts.

The resort attracted tourists with the fame of the Rosetta Stone. Once upon a time, the newcomers looked at the little ones, Ottoman town with 22 beautiful, but neglected mansions, 12 mosques, baths, mills and a castle. Only the renovation at the end of the 20th century. she restored her charm to Rosetta. None of the Egyptian towns can boast so many rare residences, brown and carefully crafted bricks, whose production secret has never been revealed. Monuments: old houses and beautiful mosques are situated a short distance from each other. It is best to end your walk through the old center at the fishing port on the Nile.
The local houses were built in the Delta style: they are soaring and beautifully decorated. It is dominated by Islamic architecture with mussarabs with geometric patterns.
The narrow facades are covered with paintings and red inscriptions, white and black. Each house has a fountain in the courtyard (dispenser). The light comes in through the skylights on the roofs. Most of these houses can be found near the station. One of them is Byte al-Ramadan, at the corner of the street. The 19th century public bath Hammam Azuz is also worth seeing.
There are a few more such buildings in the town, e.g.. al-Qanadili's house with interestingly decorated walls and the house of Thabel (1709), one of the oldest in the city, and the home of al-Manadili.
Their corners are concave, and only under the roof they take their usual shape.
It is worth seeing the Al Mahali mosque with a high minaret and an interior with five naves divided by low, recycled columns, on which the arches rest. Of interest is the recently restored Abu Shahim mill with large wooden burrs.
In distance 7 km from the city there is the Kaitbeja fort erected in 1479 r. to defend against Europeans.
During the Napoleonic expedition, the stronghold was strengthened – stones from Upper Egypt were used as material. It was then, in this place, the famous Rosetta Stone was found.