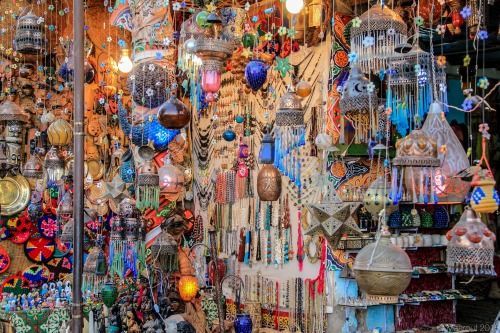 Around the Khan el-Khalili Tribe

Khan el-Khalili is the commercial heart of Cairo, where all tourists must go. They usually come by coaches and minibuses, they get off at Midan al-Hussein and enter the winding streets, where… they get lost immediately.

Szari'al-Muski is a famous Cairo street designated in the first half of the 19th century. starting from the gardens of Ezbekija. Its continuation is Shari4 Gohar al-Qaid.
It is almost a European thoroughfare with shops, which have already lost their oriental character, however, there is still eastern noise here, the crowd and the hustle and bustle. It is a wonderful transition from the almost European downtown streets to the oriental souks of susi, carriers of fresh water with liquorice, and people with carts carrying goods.
Al-Hussein Mosque (1792) it is very important to Muslims.
Egyptian dignitaries and the president pray here during the ceremony.
A building with a tall, slender minaret was erected on the site of an earlier mosque in honor of the Prophet's grandson, killed in Iraq in 680 r. at the Battle of Karbala by the Umayyads. The greatest sanctity is the head of the Islamic martyr from Karbala, worshiped by the Shi'ites.
Khan al-Khalili is the most famous Turkish bazaar of the Ottoman era. It takes its name from the great caravanserai (khan), built in 1382 r. by the Emir of Djaharaks al-Khalili (Garkasa al-Chalili), the equestrian of Sultan Barquq, in the center of the Fatimid city (szari 'Siqqa Khan al-Chalili i Siqqa al-Badestan), near the Fatimid castle. In this way, a large commercial center grew in the vicinity of al-Muska, where foreign merchants used to meet, and it was easier for rulers to exercise control over them. Merchants were selling goods in the souk, grouping into individual industries. To this day, most artisans stick together. Goldsmiths, jewelers and antique stores are concentrated in the oldest streets, where the gate arches and walls from the late Mamluk times have been preserved (gates of Sultan al-Ghuri, beginning of the 16th century).
South of Muska, Suq al-Attarin operates at shari'al-Muizz – Spice Souk. On the corner there is a madrasah mosque of Sultan al-Ashraf Barsbej. This Mamluk slave king from the Caucasus ruled Egypt by 16 years, bringing stability and prosperity to the country. The income came from the duty imposed on the spice trade, which allowed him to accumulate funds for the capture of Cyprus in 1426 r., wydartego Lusignanom, descendants of Jerusalem kings. The ruler built the village of 1425 r. mosque, whose floral crenellations decorate the roof, and the ornate dome catches the eye. The walls of the complex (mosque with madrasah and sabil-kuttab - school with a fountain) and a mausoleum with white and red stripes became typical of the architecture of the late Mamluk period. On the other side of the street, there is Ahmed Pasha's sabil from the 17th century. On the opposite side of the sharia 'al-Muizz and along Muska, there are perfume shops (Sudanese market), full of all kinds of fragrances.

After the conquest of Egypt, the Arabs founded a new city, al-Fustat, today in the southern part of the capital. Successive dynasties built their districts northeast of this place, and Saladin built a citadel on the hill (el-Qalaa). The Mamluk era was marked in the panorama of the capital by many soaring minarets of mosques.
Muslim Cairo has been inscribed on the UNESCO World Cultural and Natural Heritage List. Tangle of streets, hustle and bustle and oriental rush, amazing mixture of smells and views, people – all this kidnaps a western tourist, and sometimes even a bit scary.