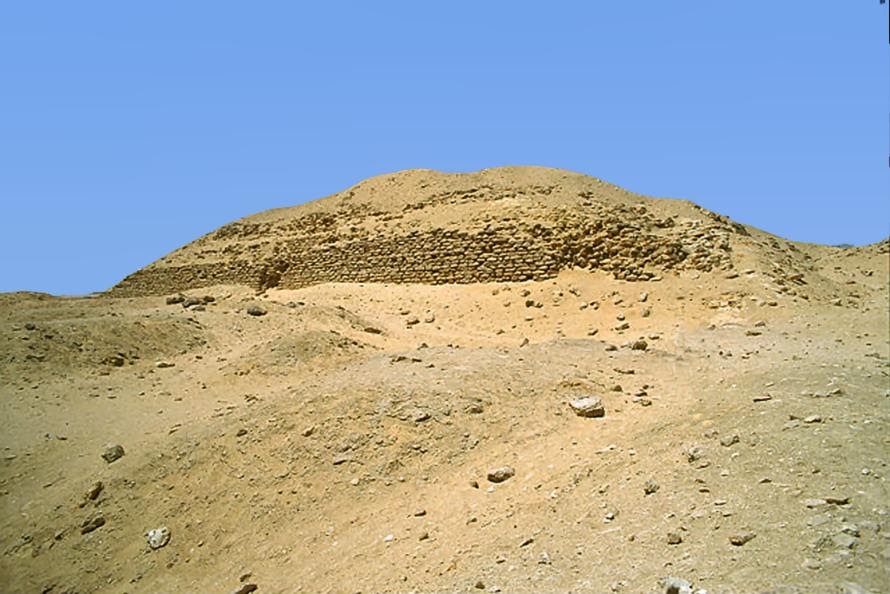 The so-called Great Pyramids of Giza and Saqqara do not end the list of these magnificent monuments erected in the vicinity of Cairo. Along the west bank of the Nile, more necropolises continue to the south.

About halfway between Giza and Saqqara, ok. 3,5 km from the solar temples at Abu Ghurab and Abu Sir, the pyramids of Zawiyat al-Aryan rise (Zawiyat al-iAryan). They are of great importance, above all, for Egyptologists. To visit them, permission must be obtained.
About 5 km from Giza you can see a very ruined group of pyramids. Buildings (deficit), known as the Unfinished Pyramid, belonging to Pharaoh Nebka-Re (III dynastia), and the Layered Pyramid of Pharaoh Khab (III dynastia), they come from the early archaic period.
They are less than a distance apart 1,5 km. For safety reasons, nothing is available to tourists inside the facility.

To the solar temples at Abu Ghurab, situated to the northeast of the Abu Sir pyramids, the easiest way to get there is a horseback or a taxi along the canal.
On the flat-cut hill you can see the ruins of a solar sanctuary, erected in the time of the pharaoh Niuserre (In the dynasty) and the sanctuary of Pharaoh Userkaf (almost completely destroyed, near the Sahure pyramid), erected in honor of the Heliopolitan sun god Re. A building with a columned portico stands on the canal itself. The main temple of Niuserre was approx. 100 m.
It is surrounded by the remains of the wall (ok. 100 me and 74 m), in the center of which was the solar obelisk (benben) faced with limestone from Tura (once had 70 m in height). To this day, you can see the sacrificial altar made of a huge alabaster block. There is also a massive obelisk pedestal with sloping walls and nine alabaster pools for the blood of sacrificial animals.. Most of the reliefs are kept in a museum in Berlin.

Abu Sir | (Abu §Tr) is a group of pyramids of Dynasty V rulers (XXV-XXIV w. p.n.e.). You can get here by taxi along the canal road, on horseback across the desert or as part of a road trip. The most important buildings of the necropolis just outside the village are: Neferirkare pyramid and mortuary temple (In the dynasty), Sahure's pyramid and mortuary temple (In the dynasty), Pyramid of Niuserre (In the dynasty). The pyramids of queens also rise here.
Excavations are still being carried out on the site. From 1999 r. do Abu Sir, where the new asphalt road leads, organized tours come.

To the northernmost complex, the pyramid of Pharaoh Sahure led approx. 200-meter ramp. Despite the destruction, the lower temple has been preserved in good condition. The lower part of the ramp is decorated with reliefs depicting events from the Sahura era and religious scenes. The upper mortuary temple has a central courtyard, where it once stood 16 red granite palm columns.
In the corridor around the courtyard, reliefs with the king hunting or sacrificing to the gods have been preserved.
South of the temple stood a small cult pyramid. The main pyramid is very dilapidated. The original height was approx. 48 m, the side of the base had 78 m, and the angle of inclination of the walls – 50° 36’.
Inferior quality limestone from the local quarry was used for the construction. The interior is not open to the public.

The Neferirkare funerary complex rises right next to it, third ruler of Dynasty V and successor to Pharaoh Sahure. If the pyramid was completed, would have 70 m in height. The mortuary temple has been partially preserved, where there were columns with lotus-type heads. The side of the base of the pyramid has 106 m. Little has survived of the facing (red granite lower parts). Entrance to the interior (unavailable) is located on the northern side of the building.
The capital of ancient Egypt, near the village of Mit Ruhajna (Mit Rahina), it is a must-see on many trips. Only faint traces and souvenirs are left of the great great city, which was collected in an open-air museum.
According to tradition, the center was established approx. 3100 r. p.n.e. by Narmer, as Ineb-hedz ("White Wall"). From Dynasty III, the capital was called Het-ka-Ptah ("House of Ptah's Soul"). Ptah was her tutelary deity. He was worshiped in his sanctuary with the lion goddess Sekhmet and the god Nefertum, portrayed as a child in a lotus flower. The current name -Memfis, comes from the specific form of the name of the nearby Pepi I pyramid – Men-nefer-pepi. It first defined the surroundings of the pyramid, then a nearby town – then it was shortened to Men-nefer ("Lovely place"). About 350 r. Emperor Theodosius ordered the temples of pagan deities to be demolished. Even in the Middle Ages, the ruins were astonishing. Total destruction took place in the 18th century., when the remains began to be used as a quarry and built into mosques and palaces of Cairo. To this day, only the remains of the foundations of the Temple of Ptah and Serapeon have survived, ruins of Merenptah's palaces and great statues, including the alabaster sphinx (Totmesa II lub Amenhotepa II) and the lying colossus of Ramesses II. Excavation works are hindered by the high level of groundwater.