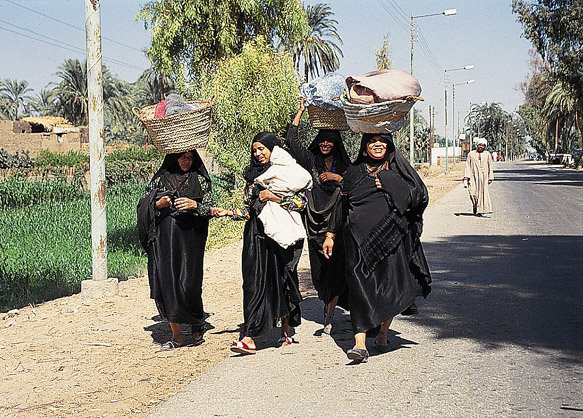 He lives in the Nile Valley 95% the country's population, even though it only takes 4% Egypt's surface. The country is mainly inhabited by the descendants of the ancient Egyptians, Arab newcomers, Greek, Syrian and Jewish, and to the south the Nubians. The Berbers live in the Western Desert.

A small percentage of the descendants of Europeans live in cities. The largest population is in Cairo and Alexandria (Cairo has approx. 20 min residents, and Alexandria above 3 min). Most Egyptians are farmers – fellachowie.
Egyptian villages have been established in two places for centuries. One thing is traditional – riverbank, where the fellachs build mud-brick houses. The buildings are rectangular, with small spaces. A flat roof is used as a sleeping terrace on hot nights or as a storehouse of unnecessary items.
Richer villages have plastered and painted houses. Although Islam forbids the depiction of people and animals, decorations deviate from the canons. Usually these are people's homes, who made a compulsory pilgrimage (hajj) do Mekki.
When tourists visit the village, the walls become a huge advertising poster and you know immediately, where alabaster items are made and sold, where you can buy papyrus.
It is not only poultry that runs in the streets, but also children. They go to school, but after class they don't have time to play. Girls attending the upper years of secondary school are reluctant to see them.
In a traditional village, they quickly complete their compulsory education and learn to play the role of wife and mother. The boys, who have already returned from school, they learn to cultivate the fields under the watchful eye of their fathers.
The northern part of the valley is inhabited mainly by farmers – fellachowie, who – despite the calls of radical Islamists – keep calm. But the people of the south – Sa’idi, they are considered hot-blooded and hot-blooded.
Nubians have darker skin than Egyptians. The women dress colorfully, but the clothes are covered with black coats. They love jewelry; they wear two strings of beads around their necks, covered with two more necklaces with badges with the names of Allah. From the forehead hang tags with Koranic texts, and large earrings adorn the ears. They wear silver hoops on their ankles, and the fingers of the hands are silver with rings. They decorate the body with a tattoo similar to moles, and on the forehead, the drawing takes the shape of a crescent; they also draw lines that run from the mouth down to the chin. They dye their hair with henna and use intoxicating perfumes. The men wear traditional white jerseys with short colored vests. The heads are covered with small caps with a round bottom. They are honorable, they respect the opinion of the tribe and the elders of the family. They value people with estates and wells as well as being well-born, which do not dry out. Marriages are often made between cousins. Traditional life in Nubia has mostly revolved around small rural communities, living according to the eternal calendar of floods and droughts. Painted mud brick villages, with houses with domed roofs shaded by palm trees, field of corn and sorghum melons, the fishbanks of the Nile – it had all been going on for ages. Palm groves provided the Nubians not only with food, but also products needed in everyday life. The Nile fed and dressed, he was everything: a source of tradition and a deity listening to prayers. Bustling life on its shores, frozen in shape for generations, it seemed unchanging and constant. Suddenly the Nile became a stepfather with my father. Nubians, who have kept much of their pagan tradition, they faced the problems of living in twentieth-century society.