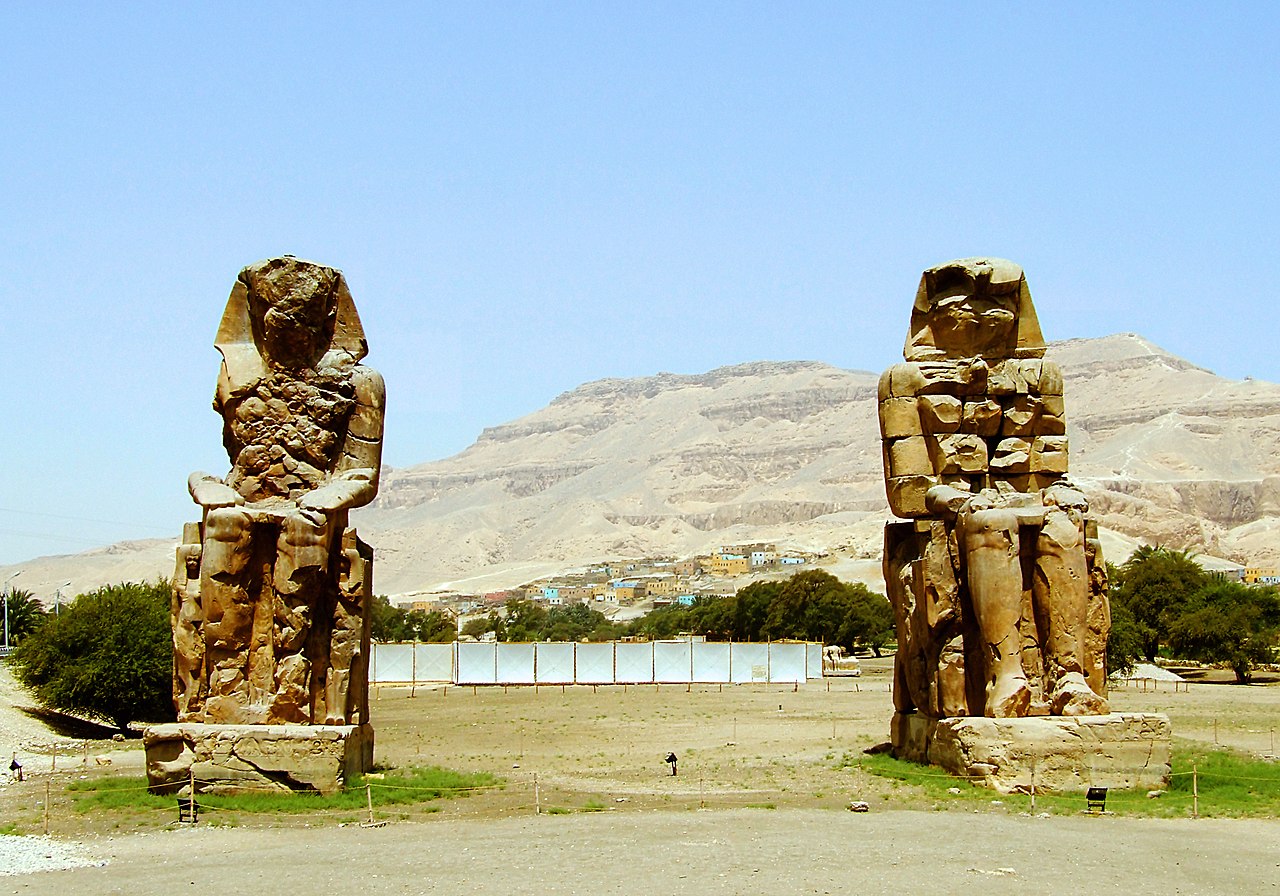 Right on the road, almost a kilometer beyond the village of Al-Gazira, there are two huge Colossi of Memnon among the fields (height 23 m). This is the only remnant of the tomb of Amenhotep III (XVIII dynastia). The colossi was destroyed by time and the ancient tourists. They were forged from Giza or Jabal al-Sisila quartzite. The North portrays Amenhotep III with his mother Mutemwija, and the south of Amenhotep III, his wife – Teje and one of the daughters. On the sides of the throne are carved symbols of sema-taui - the gods of the Nile connecting Upper and Lower Egypt.
During the earthquake of 27 r. p.n.e. the colossi have broken, and the air squeezing through the cracks of the northern colossus made sounds like groans in the morning. This phenomenon was described by the Greek traveler Strabo, residing in Egypt in years 25-24 p.n.e. The Greeks quickly created the legend of the "singing stone", linking it with the myth of Memnon. The picturesque story thus advertised the colossi, that hundreds of ancient "tourists" were drawn to them. And so Amenhotep III became an ancient hero, son of Jutrzenka and Iles. Dawn begged Zeus to resurrect her son for a while. Every morning, when Dawn touched the statue with her rays, he replied with a mournful cry. The legend has its natural causes: the gap in the statue caused the air to vibrate as the temperature changed before sunrise. Ancient travelers sat around stone colossi, they recited poetry, they ate and drink and waited for a miracle. Some people placed on the legs of the figures inscriptions about their fascination with the phenomenon. Even Emperor Hadrian himself came here with his entire court. Memnon greeted the emperor three times, what Julia Babilla had engraved, then taken poet. The last inscriptions come from the times of Septimius Severus, which, with the best intention of St. 199 r. secure the cracked torso of the colossus. Then Memnon was silent forever. The fame of the colossi began to fade and until the nineteenth century. monuments remained forgotten. The southern colossus also has an interesting past. When it split into two parts, torso crashed to the ground.