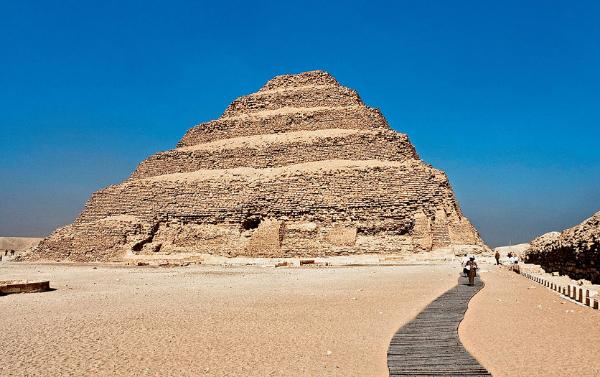 Neczerichet's funerary complex with the Step Pyramid. In the middle of the necropolis there is the Neczerichet tomb complex (Djoser, also: Djoser), rulers of the 3rd dynasty. Like all pharaohs at that time, he had two tombs – as king of Lower and Upper Egypt. Cenotaf, that is, an apparent grave, it was situated at Beit Khallaf near Abydos (dried brick mastaba -50 me and 95 m, heights 10 m). The actual tomb was in Saqqara. To realize the originality of the Step Pyramid, you have to remember, that until then the pharaohs were buried in mudbrick inastabs, buildings in the shape of a bench in front of an Arab house - rectangular structures with walls slightly inclined inwards. Djoser was the first Egyptian ruler to break with centuries of tradition.
A novelty was the use of a durable stone – thus referring to the traditional brick construction, papyrus cane and wood. Brilliant Imhotep – great priest of Heliopolis, king's vizier, chief architect, sculptor, carpenter and doctor – he has created a memorable work. He was valued during his lifetime, as evidenced by fact, that Joser had his name put on the base of his statue. It is an incredible achievement for an Egyptian to attain immortality together with a divine ruler. In the times of the Middle Kingdom, Imhotep was worshiped, and in the Later Period he was deified as the Son of Ptah. It is suspected, that he was buried near the pyramid of his ruler. W XVII w. some Europeans were able to see and enter the Step Pyramid, but research began only after Napoleon's expedition.
W 1821 r. Prussian general Johann Heinrich Freiherr von Minutoli discovered a tunnel allowing entry from the north. The greatest contribution was made by the French architect Jean-Philippe Lauer (1902-2001), who decided to reconstruct the entire complex and spent there 70 years.
The Step Pyramid complex is made of beautiful limestone, modeled on the royal residence in Memphis.
Many architectural elements appeared for the first time: beam columns, rows of serpents-ureus, greenish tiles imitating plant mats, bunches of reeds as an ornament. The pyramid and auxiliary buildings are surrounded by a limestone wall with avant-corps (545 me and 277 m), in which is 14 gates -only one leads to the interior, the rest are blind gates. The Procession Corridor leads inside, whose ceiling was propped up 12 pillars in height 6,6 m, decorated with columns recessed into the wall, reconstructed in the years 1946-1956.
In front of the entrance you can see the so-called. South Tomb with a deep shaft (with stairs) and a chapel. The original limestone wall is finished with a frieze representing cobras, symbol of ureus - royal power. The interior of the tomb with a system of galleries depicting the transcendent palace of the king is decorated with green and blue faience tiles. There was a warehouse here with jugs containing food. The burial chamber is covered with pink granite slabs. The so-called. The limestone blind gates are decorated with representations of the king in the White and Red Crowns of Egypt during a ritual run. Many researchers believe, that this is the true tomb of the pharaoh, others say, that the placenta was buried here, in which he was born.
Great Courtyard, on which the pyramid stands, surrounded by buildings and chapels associated with the cult of the pharaoh and the festival of Sed (eastern part of the courtyard). In the Jubilee Courtyard, one-of-a-kind catches the eye, unique in the architecture of the column (reconstructed in the years 1920-1965). The row of chapels with a stone imitation of open wooden gates leading to the courtyard is also noteworthy. Smooth facades 12 those standing on the eastern side were surrounded by a semi-convex cornice. The three corner ones were protected by unfinished statues of Osiris made of limestone – this model of a mud-brick religious building in Lower Egypt was called per-nu. Two of the chapels were reconstructed on the north side of the courtyard. On its west side rose theirs 13. On the eastern side of the Great Court, just behind the Jubilee Courtyard is the Courtyard of the South and North Pavilion, perhaps intended for the royal ka. In the South Pavilion, the walls feature graffiti from the 18th and 19th dynasties. The entrance is decorated with pillars with beam semi-columns finished with lotus-shaped capitals.
In the North Pavilion, the ceiling from the outside is supported by four slender half-columns with capitals in the form of open papyrus canopies.
Same pyramid, team center, was built in several stages. Originally, a huge mastaba was erected over the funerary shaft.
After modifications and adding five smaller ones to the enlarged lower mastaba, the now known facility was built. It is not known, whether it was the final shape, or only one of the stages. Perhaps the aim was to obtain the form of a "classic" pyramid, famous from Giza. The current dimensions of the Step Pyramid in height 62,5 m are approx. 140 m along the east-west axis i 118 m along the north-south axis. It was made of sandstone marl, which crumbles and falls apart (hence the reconstruction of the northern wall). There was no cladding or the cladding had fallen off and is missing. Many of the intersecting corridors have so far not been explored.
Perhaps some of them were dug by grave robbers. Inside, apart from chambers and corridors, archaeologists found shafts, in which it was discovered 40 thousand. stone vases of many shapes and materials (alabaster, diorite, limestone, slate).
To the north of the pyramid you can see the ruins of the temple and the room called the serdah built in front of its eastern wall, where a seated statue of Pharaoh Doser was found (currently at the Cairo Museum). Once in place, the replica can be viewed through two openings in the stone wall.