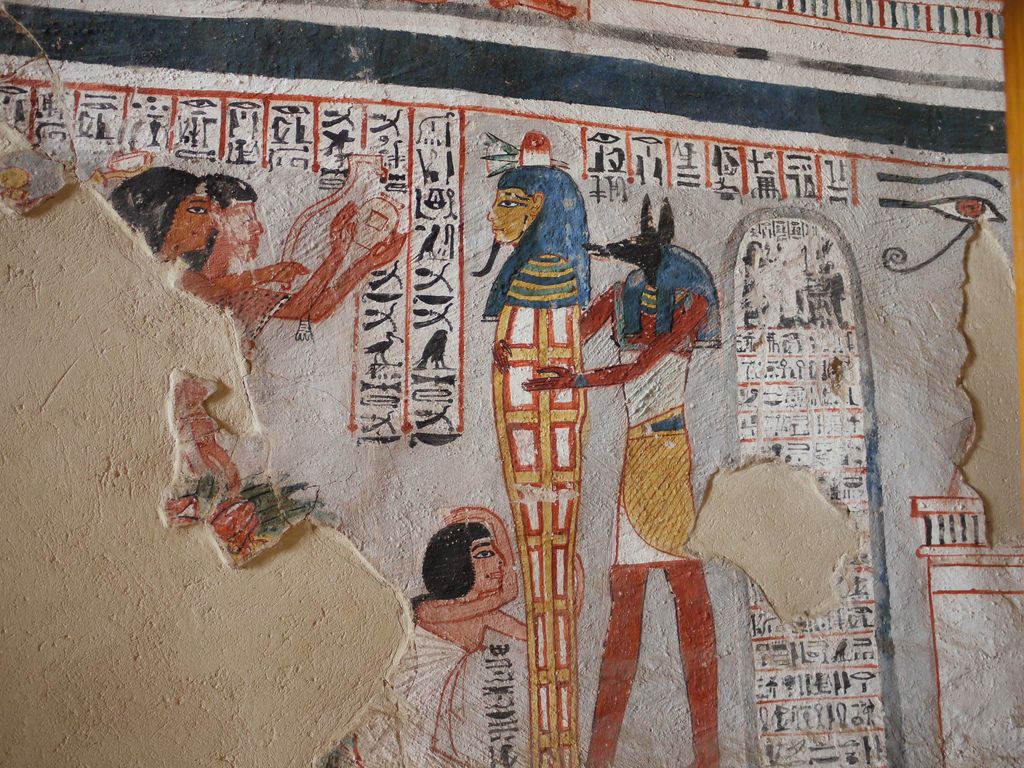 Located on the edge of Dra Abu el-Naga (ok. 1 km by road from the tombs of Al-Chocha), have recently been made available to the public.
The necropolis lies between the village of Al-Tarif and the Asasif necropolis. You can get there by pickup to Al-Gabana.
You have to get off near the big sign with the portrait of President Mubarak, then take the path to the left. It's right here 114 the rock-cut tombs of state dignitaries, rulers and members of their families: temple of Mentuhotep II, Antef graves (dynastie XI, XIII i XVII) and the tomb-pyramid of King Alimose I and Queen Tetisheri.

It is the resting place of the royal scribe on the estate of Horemheb and the estate of Amun and his wife Nebettaui, called Taui. A tomb dated at the turn of the 18th and 19th dynasty, known since 1822 r., has recently been restored. The building is rectangular in shape, and the walls and ceiling are not completely smooth. The ceiling is decorated with geometric patterns. Other decorations are more formal. The walls are decorated with paintings with cries, sacrificial bulls and funeral gifts. Hive accepts gifts and does his daily work and makes offerings to the gods with his wife in the golden chapel. In the niche on the back wall there is a stele with a solar barge adored by baboons

it was never finished, and some of its decorations on the plaster have been irretrievably lost. Conservation completed in 2002 r. The current entrance is carved in the back wall, so to view the paintings in correct order, one has to go to the small vestibule at the original entrance. At the front door there is a portrait of the adoring Shuroy, the carrier of the Amun cauldron in the time of the Ramessids.
In the first room, the ceiling is painted in geometric patterns. On the walls there are hieroglyphic texts of the Book of Gates. Shuroj and his wife Wernefer stand before the gods and guardians of the gates of the Underworld. The second tomb room has short walls and a southern wall without paintings (here is a new entrance to the tomb). The ceiling was painted in a checkerboard pattern of bright yellow and white fields and a series of red and yellow circles. On the wall, men are carrying victims. Some get tired of carrying huge boxes. In the lower row, Shurai walks among the trees, in the garden, followed by a servant with fans. There is also a funeral procession and the traditional opening of the mouth ceremony. Kneeled Shuroj performs sacrifices for the Hathor cow in Western Mountain. Next door, there is a funeral banquet with musicians and dancers. There are not many paintings on the back wall in the niche, but you can see a crouched man. Finally, Thoth leads Shuroy towards seated Osiris, who is waiting for the deceased in the company of Isis and Nephtyda.