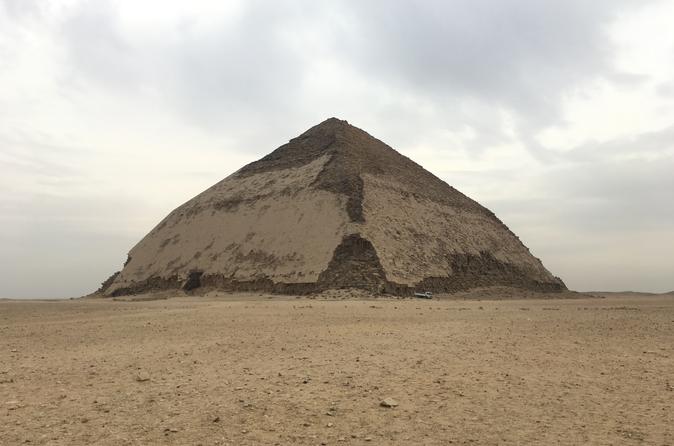 Pyramids at Dahshur and Mazghun

The pyramids in Dahshur are clearly visible from before the Djoser pyramid (Dahshur). Individual tourists can only get here by taxi. The first group of buildings are three burial complexes from the Middle Kingdom near the canal, closest to the farmland, and the other is the Old Kingdom buildings: two pyramids of Sneferu, founder of the 4th Dynasty and father of Khufu. Further south, towards Al-Liszt, the ruined pyramids of Mazghun are rising (Middle Kingdom).

The pyramids from the times of the Middle Kingdom have not survived in the best condition. The Black Pyramid of Senuseret III stands near the irrigation canal (Sezostrisa) from the XII Dynasty. The name comes from mud brick, from which it was built. Next to it were the tombs of royal women, m.in. the ruler's daughter, Princess Khnumit.
There, at the end of the 19th century. Jacques de Morgan found a famous jewel collection (Cairo Museum) with the finest examples of Egyptian jewelry. Further south is the ruined White Pyramid of Amenemhat II (XII dynastia). She survived in such a bad condition, that it is impossible to determine its size. Nearby you can see the tombs of the queen and four princesses. Further on, next to the cultivated fields, stands the Black Pyramid of Amenemhat III, of which a black mud-brick core remained. It is not known, how high it was originally – the side of the square base was counting 100 m in length. There are pieces of white limestone veneer around.

Most of the names of the monument do not correspond to its appearance. Creator of the Broken Pyramid (Bent Pyramid, Rhomboidal pyramid) for a long time it was unknown. In years 50. XX w. during the archaeological excavation it was established, that it was undeniably Snofru.
The road to the South Pyramid goes through the lower temple, situated near agricultural fields. It is the oldest excavated object of this type.
The ramp leads to the actual eastern temple – a small one, a chapel open to the east and west with a sacrificial table slab. There were two large steles on the sides (partially preserved; the rest in the Cairo Museum). The chapel was rebuilt at the end of the Old Kingdom and in the Middle Ages, when the cult of Snofru was spreading. There is a pyramid in the south, where the remains of a mortuary temple and carved stelae were found. The facing has been preserved in the lower parts. The broken pyramid was built of local limestone and covered with a white limestone veneer, many of which have been preserved in situ. The square base has a side length 188,6 m; reaches height 191,5 m. The inclination angle of the sides is 54 ° 31 '13 "to the height 49,7 m, and then changes to 43 ° 21 '. This gives the building a characteristic silhouette. Researchers tried to explain this change in angle by the difficulty of maintaining the stability of the stone walls (too much weight crushed the vaults of the chambers). Perhaps the work needed to be completed sooner. The instability of the walls can be seen from the damaged corners of the building. So if a construction disaster forced the ruler to erect a new tomb, it is clear, that its parameters were like the Red Pyramids.
At the base of the Broken Pyramid, in the place where the veneers were broken by the robbers, you can see the way, how the perfect shape of the building was obtained and how the walls were leveled with a rope, chisels and poured water.

The pyramid in Majdum (Maydum) it is situated closer to the oasis of Fayoum than to Cairo, but most often it is visited together with the pyramid complexes in Dahshur. Majdum is already in central Egypt, in an area potentially dangerous for tourists, therefore they are under special care.
There are no large coaches and crowds inside the monument. 800 m road through the desert sands is driven by a car with a police escort. Accessible via the canal road through Egyptian villages or the main road from Cairo. Turn onto Al Rekkah, where, after the check at the check point, you have to wait for a police escort.
You get to Beni Suef in a similar way
The locals call this structure El-Haram el-Kaddab – False Pyramid or Collapsed Pyramid. Researchers are still having lively discussions, who was its builder.
Is Muni, Sneferu's predecessor on the Egyptian throne, or the Snofru himself? Some scientists agree to this, that Huni erected the fragment, but he couldn't finish the job. Snofru, on the other hand, wanted to rebuild the building and give it a shape similar to the Djoser pyramid. Petrie found many stone blocks with his name dated to 17. year of the reign of the ruler. Built in the old style, the pyramid consists of seven steps. First, still visible, ma 11,2 m in height, second – 9,9 m, and the third, the most damaged, 6,85 m. The pyramid was built of blocks of polished limestone. The original structure was then enlarged and more were added to it 5 m and perhaps the eighth degree. In effect, it was supposed to be a real pyramid (layered type) with a surface covered with limestone from Tura. The whole thing has reached height 92 m, with the side of the base length 144 m and the inclination angle of the walls 51 ° 51 '. It all collapsed and only the core remained. Today, the shape of the three-step object looks more like a tower than a pyramid.

The entrance is on the north side in height 18,5 m above the ground. Wooden stairs lead to it. A narrow passage carved in the rock leads down (57 m). A short horizontal corridor and a small vestibule with a niche to the right runs into a vertical shaft with a rickety ladder. You need to climb it to the burial chamber (6 m in length, 2,60 m wide), at the level of the original ground level, with a corbel vault already designed above rooms cut into the bedrock, similar to the others, later solutions known from the Sneferu pyramids and the Great Gallery in the Wantops Pyramid in Giza. There is no trace of the sarcophagus or the king's remains in the chamber (perhaps he was never buried here), Instead, there are cedar beams probably used to transport the sarcophagus. A novelty is the remains of the satellite pyramid on the south side of the pyramid.
On the eastern side, there is a small mortuary temple made of limestone and well-preserved with two rooms and an open sacrificial courtyard with stelae. During the excavations in the years 80. XX w. w Seila (Fajum) established, that Snofru had built another pyramid here.
However, it is not known, when he abandoned the extension of the Dahshur pyramid. The monument was plundered during the 20th dynasty.
Around it there is a necropolis with the tombs of nobles and princes from the times of the 4th dynasty. Giant mastaba no 17 at the pyramid itself was explored by Petri v 1910 r. It is not known, who she belonged to, but it is suspected, that to one of the sons of Snofru. Inside the tomb, which leads to a narrow and rather claustrophobic-looking corridor (you can enter it),

Petrie found an unadorned sarcophagus. Prince Rahotep's double mastaba also draws attention in the necropolis, syna Snofru, the great priest Heliopolis and his wife Nofret (mastaba 6). Their supernatural figures made of painted limestone are exhibited by the Cairo Museum. In another double mastaba, belonging to Nefermaat and his wife Itet (mastaba 16), a magnificent painted frieze with geese was found (Egyptian Museum).