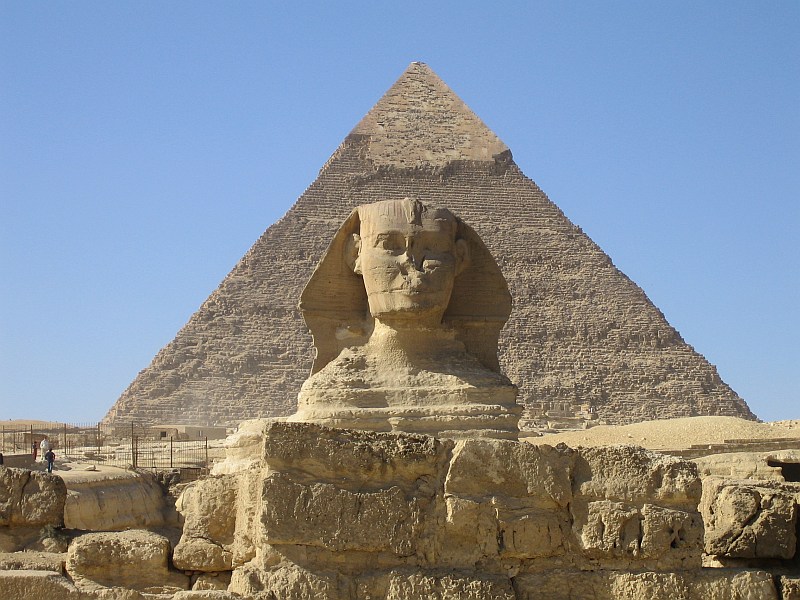 Sphinx – At a distance of approx. 330 m from the Pyramid of Chephren stands the Centuries of the Sphinx, called by the Arabs Abu al-Haul – "Father of Terror". From time to time the monument was covered with sand – covered him still in 1926 r. The great reclining lion with the head of a man has attracted the attention of those wandering the Giza Plateau for centuries. It was carved in the rock left over from the quarry, from which the building material for the pyramids was extracted.
It has over 20 m in height and 57 m in length. It probably dates from the reign of Khafre, Pharaoh from the second pyramid. The features of the Sphinx's face were similar to this ruler, However, this belief is undermined by recent studies comparing the dimensions of the face of the Sphinx and Chephren's face, and Khufu's face, known only from a small statue from the tomb of Queen Hetepheres. The monument was painted in harsh colors – his face was red, beard and eyebrows black, a scarf – noble – with blue and yellow stripes. One of the hypotheses is, that perhaps Chephren wanted to honor his father in this way. The other guess is so fantastic, that is unbelievable. Some American geologists believe, that the Sphinx may even have 12 thousand. years, which is to be proved by the eroded body of a lion. They forget, that not only water can destroy hard rock, but also the wind, carrying sharp grains of sand, cutting stone like a diamond.
Dr Zahi Hawass, referring to the geological research of the substrate, argues, that the erosion could have been accelerated by mineral salts contained in the soil and seeping to the surface.
Soft limestone, from which the Sphinx was forged, deteriorated under the influence of sandstorms, therefore, it had to be renovated many times after its excavation. One of the oldest is mentioned by the famous Dream Stele, placed between the paws of an animal in the time of Tuthmosis IV. As a prince without much chance for the reign of Tuthmosis IV, syn Amenhotepa II, he went hunting on the plateau and fell asleep wearily in the shadow of the monument. He dreamed of the Sphinx, who promised the throne for digging out of the sand. The prince heeded the request of the stone lion, then, as a result of the sudden death of his elder brother, he became pharaoh.
To prevent the Sphinx from flooding with sand, ordered a brick wall to be built, which stopped the shifting dunes for a while. This story was probably supposed to justify the strange enthronement of the ruler, and maybe even participating in a silent attempt on the life of my older brother.
Originally the Sphinx was called Hor-em-Akhet, which means "I lorus, which is on the horizon ". The Greeks converted the name to I larmachis. In the times of the New Kingdom, it was a pilgrimage center here. Rulers and ordinary Egyptians came to him.
Archaeologists have found the remains of the temple of the Sphinx from the time of Amenhotep II, syna Totmesa III. Later monarchs expanded this tabernacle. The cult of the Sphinx continued until the fall of the Ramessids. In Ptolemaic times, attempts were made to stop the erosion process that was destroying the body of the Sphinx. Later, in Roman times, the body of a stone monster with a human head was covered with sands.
The face of the Sphinx was disfigured, not as the British had said for many years, by Napoleon's soldiers, but still in the Middle Ages by order of a dervish named Saim al-Dah, who by this act wanted to destroy the pagan genie and thus contribute to the victory of Islam.
This version was given by the late W. 1436 r. Arab historian al-Makrizi.
In years 1989-1998 The monument was once again subjected to renovation and research - internal voids were then discovered under its body.