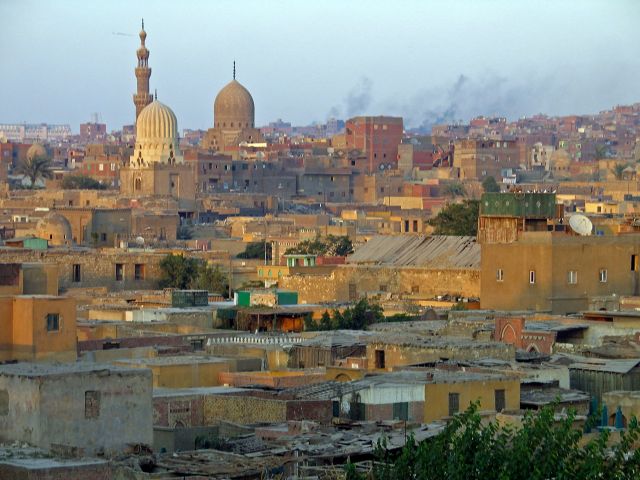 Old Cairo is a part of the city that combines antiquity with modern times, where ancient fortifications and places associated with the birth of Christianity are concentrated. The first Muslim city was built on this site, and the island of Roda is famous for the nilometer. Usually, a trip to this part of the capital involves visiting the Coptic district, where you can reach quickly by metro (stop Mari Giris) or river taxis.

Old Cairo is the oldest part of the city (Misr el Qadima, Masr el-Qadima). Egyptologists think, that already in the 6th century. p.n.e. there was an urban settlement here. In Roman times, a fortress and the city of Babylon grew there. Christians living here began spreading their faith throughout Egypt, about that, how strong she was testified by the past 20 preserved temples erected on a small area (five have survived to this day, which can be visited). There are not only churches in the district, but also the oldest synagogue in the city and the oldest mosque.
The Christians here lived peacefully during the times of the greatest persecution in Alexandria, and then it was the mainstay of a dissenting mind on the nature of Christ of the Coptic Church, persecuted by the state church. The bureaucracy and oppression of the Byzantines so troubled the Egyptian Copts, that when in 641 r. Muslim troops approached the walls of Babylon, promising tolerance and respect for faiths, only the Byzantine army tried to fight, with the silent presence of the inhabitants.
Near Mari Giris metro station (st. George) you can see two towers belonging to the gate leading to Babylon, built in the time of Emperor Trajan (ok. 98 r. neither.).
The ground level has risen like that (ok. 10 m) Since that time (garbage and silt from the waters of the Nile), that the towers were below the modern surface. Anyway, the whole district is much lower now, which can be seen from the series of gates closing the alleys before the floods, which until the beginning of the 20th century. plagued the neighborhood, before the old dam in Aswan was built. The remains of the tower have been carefully restored.
On the northern part of the fortifications stands the Greek Orthodox Church of St.. George, and the rest of the walls are the basis of the Suspended Church. Between the remains of the gate and the church of St.. George, you can see the buildings of the Coptic Museum, where you can learn a lot about the Copts, their Church and their arts. The museum was founded in 1910 r. by Morkos Smeik Pasha, collector of Coptic antiquities, which were saved from destruction in forgotten churches and monasteries throughout Egypt. On 800 m2 (building and garden) various monuments are exhibited (ok. 16 thousand. w 12 different departments). On the ground floor there are stelae with Coptic inscriptions, and on the upper floor there are paintings, woodwork, ceramics and glass. W 1947 r. a new wing was added, over 1200 m2, where statues are exhibited, constituting a kind of transition between pagan and Christian art. The remaining rooms are dominated by stelae and wall paintings. W 1947 r. a new wing was added.
Manuscripts were placed on the first floor of the new wing, also containing papyrus books. Famous textiles are also exhibited here, icons, bone products and metal objects.