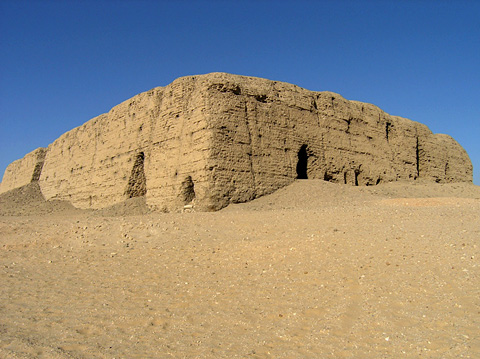 Not far south of the Djoser complex there are tombs and ruins of objects from different eras.
Three mastabas stand against the south wall of the complex. Visitors have been made available 10 Princess Idut sal mastaba. the daughter of Pharaoh Unis (VI dynasty).
In five rooms, interesting bas-reliefs with traditional scenes depicting fishing or farming, but also others: showing a crocodile, who is going to eat the calf, or the crossing of the river by herds of cattle, or a scene with scribes and artists at work and their utensils – inkwell, reed feathers, brushes and a roll of papyrus. In the mortuary chapel, the blind gates were painted with granite-like paint. A bull sacrifice is carved on the walls, which is made by the princess. Another mastaba, Nebet, can be seen nearby, her father's wife Idut, and a little further the Unis pyramid itself.

The tomb of Unis located south of the Djoser Pyramid (Unasa), Pharaoh from the end of the fifth dynasty or the beginning of the sixth dynasty, in antiquity it was called Perfectly are Unis's places. This smallest pyramid of the Old Kingdom once had 43 m in height, today it's only approx. 20-one meter mound with sides approx. 57 m. The lower layers have been preserved) veneers. The eastern part rises above the Hotepsekhemui underground tomb. The six-layer core of the building was made of untreated blocks of local limestone. Smaller blocks were stacked with larger ones up to the top, and then the pyramid was clad with white polished limestone. The pyramid has been in ruins for approx. 2000 r. p.n.e.
After entering from the north, slightly below ground level, you walk along a long corridor 14,4 m leading down to the walk-through chamber. Then the corridor runs horizontally (with three trapdoors) on the episode 14,1 m and ends with the vestibule (3,8 on 3,1 m). From here you can head east to a warehouse with three niches. On the right is the real burial chamber (3,1 me and 7,3 m) with a black basalt sarcophagus. The corridor and the room are lined with white limestone from Tura. The burial chamber was faced with alabaster. The tent vault is decorated with an ornament of golden five-pointed stars. The chambers and corridors are covered with the oldest Pyramid Texts found so far. Inscription for hieroglyphics, a collection of magical-religious scriptures designed to protect the deceased pharaoh in the afterlife, were carved in white stone and colored green. On the eastern side of the pyramid you can see a mortuary temple decorated with reliefs, from which it runs 700 meters, A reconstructed cult road, once covered with slabs. It consists of a vestibule, an open courtyard with columns with palm capitals, a transversely running corridor and a temple of posthumous worship.

In the vicinity of the Unis pyramid, tombs from Persian times attract attention. In this place (currently not available to visitors) the court physician of Pharaoh Psameticus I was buried. The guards suggest, that too much tip will open the entrance. Horemheb's tomb is nearby, who had him forged, while he was still the commander-in-chief of the Amarna kings. Some of the sculptural decorations have been stolen. There is Tii's tomb nearby, sisters of Ramesses II, and also discovered in 1986 r. Maja's tomb, treasurer Tutankhamun (closed).
In the east, there are the ruins of the monastery of St.. Jeremiah of mud brick (half. VI w.), destroyed in the 10th century. by Arabs. Most of the architectural details and paintings were transferred to the Coptic Museum in Cairo.

The pyramid of Teti I, similar to the Djedkar and Unis pyramids, also resembles a mound of rubble. It was originally high 52,5 m, the length of the side of the base was 78,5 m, and the angle of inclination of the walls 53 ° 13 '. On the eastern side, next to the temple stood a cult pyramid of height surrounded by a wall 15,7 m and a similar length of the side of the base. The open courtyard around the pyramid is surrounded by a wall of limestone blocks.
A square was discovered in the northwest of the courtyard, 40-meter long shaft. The inclined ramp leads to the mortuary temple, which consists of an open courtyard, once surrounded by eighteen pink granite pillars. In the side part you can see the ruler's title in a deep forged relief. The lower mortuary temple has not yet been discovered.
The entrance to the underground part was located in the floor of the courtyard of the northern chapel. The entrance to the corridor is finished with blocks of pink granite. The vestibule and the burial chamber have gable vaults, formed from three layers of enormous limestone blocks. The ransacked sarcophagus stood at the western wall of the chamber – all its walls (as well as the vestibule) they are covered with reliefs with the Texts of the Pyramids. The ceiling is decorated with five-pointed stars imitating the sky. The serdab in the eastern part of the vestibule has three deep niches.

Pyramid Userkafa, founder of the V Dynasty, it is also badly damaged. The complex called Clean are Userkaf's places was modeled on the buildings of the 3rd dynasty. It was originally clad with white limestone from Tura 49 m in height, side length 73,3 m and a slope angle of 53 °. During the reign of Ramesses II, it was restored by the son of Pharaoh Chaemuaset. Today there is no trace of the renovation, and this is because of the stone robbery and careless workmanship.
On the eastern side of the monument, you can see the temple of grave victims, consisting of three rooms with blind doors. To the south of the complex, the pyramid of the main royal wife draws attention (original height – ok. 17 m). Solar temple – the main sanctuary of the pyramid - it consisted of a courtyard with a sacrificial altar and chapels in the southern and northern parts. A ramp led to it from the east. There was a cult pyramid to the west of it. A long corridor leads down from the entrance on the northern wall 18,5 m. It runs straight to the vestibule and the burial chamber covered with Tura stone (7,87 on 3,13 m) with a basalt sarcophagus. There are several mastabs of dignitaries in the vicinity of both pyramids.