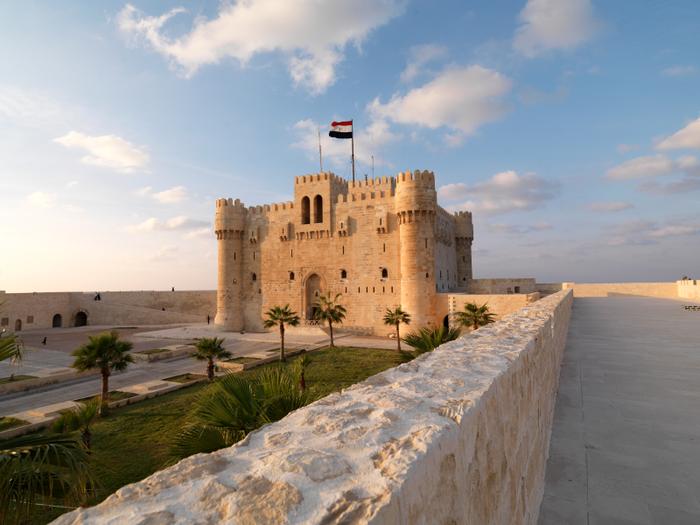 From antiquity until the mid-twentieth century. Alexandria (Alexandria, arab. Al-Iskandarijja) she was with Egypt, and not in Egypt. It is now Al-Iskandariyya, predominantly Egyptian city, which has forgotten its Greek, Jewish, European and Levantine past, but still captivates with its otherness.
In years 50. In the 1980s, there was a massive exodus of non-Egyptians. Greek cafes are gone, Jewish shops and the Levantine charm of the center. The Egyptian authorities saw in him a hateful image of European decadence and cosmopolitanism. He was eradicated so thoroughly, that only a shadow remained of that past. Today there is a different danger. Modern neighborhoods are breaking into the destroyed one, historic center. If no money is found for its renovation, nothing will be left of the crazy city for years 20. XX w.

Alexandria is one of the cities founded by Alexander the Great. A chief in Egypt was greeted as a liberator. He skillfully shaped his image - declared his respect for Egyptian culture and religion. During his stay in Memphis (then the capital) he made sacrifices to the Egyptian gods and was crowned the next pharaoh of Egypt. Then he went to the oracle of Amun in the oasis of Siwa, and on the way he stopped at the shores of the Mediterranean Sea. There, on the beach, he made the decision to found a city (332 r. p.n.e.) on the site of the Egyptian village of Rakotis. As the legend says, he drew his plan himself, spreading his soldier's cloak - chlamide on the sand. They were built according to the design of the Macedonian architect Deinocrates, who used the idea of ​​Hippodamos of Miletus (a grid of streets crossing at right angles with the agora in the center). Alexander did not see his first Alexandria. On the route of conquests, he established a few more similar centers, but none of them equaled the first.

When Alexander died in Babylon, his chiefs, diadochs - "successors", they torn the empire apart. The king's most faithful friend – Ptolemeusz, syn Lagos, got Egypt. He drove away, taking the body of Alexander, which he buried in a special mausoleum in Alexandria. Initially, the satrap Ptolemy resided in the old capital, and then he settled in the nascent Alexandria (320/319 r. p.n.e.). W 305 r. p.n.e. Ptolemy I proclaimed himself an independent ruler.
He was the founder of the Library of Alexandria and Muzejon. He gathered the most famous scholars and writers of the time at his court.
Alexandria was beautiful – it was referred to as "the brightest and the most splendid". The Greeks lived in it, Egyptians and Jews. The royal palace stood here, Library Aleksandryjska i Muzejon, tomb of Alexander the great (Soma), temples, the famous lighthouse of Faros, two ports. In the western parts of the city (Rakotis) the Egyptians lived, a w Neapolis – Greeks. The center was situated on the trade route connecting the East (syria, Arabia and India) with the farthest west (Carthage, Italy, Gaul and Spain). Alexandria became one of the great centers of the intellectual and cultural life of antiquity, Main, next to Athens, capital of Hellenistic culture.
Alexandrian art and literature related to the Library were born here.
Science developed in Muzejon: biology, medicine, astronomy, maths. A syncretic deity was worshiped here – Serapisa.
After the great Ptolemy, like Ptolemy I Soter or Ptolemy II Philadelphos, the Ptolemaic Minor followed, and then quite small.
The power and wealth of Egypt collapsed in internal disputes and wars. The last Egyptian ruler of the Ptolemaic dynasty was Cleopatra VII. She gained power, using Julius Caesar, to whom she gave birth to a son. Together with the dictator, they wanted to conquer the world.
These plans were put to an end by the murder of Caesar on the day of the March Ides 44 r. p.n.e. Cleopatra did not change her plans and involved Mark Antony in their implementation, who was captivated by the vision of unifying Egyptian and Roman cultures. However, the queen did not succeed either – after the lost Battle of Actium, and then the death of Antony, committed suicide, and Egypt fell into the hands of the Romans.

The city maintained its position as the capital of the province of Egypt directly subordinate to the emperor.
Residents kept all privileges, and even gained new ones - for a long time only they could apply for Roman citizenship. Alexandria was still the capital of culture. W I w. Christians came here, and of III w. the city became the intellectual center of Christianity, boasting such notables as Clement of Alexandria, Orygenes, Athanasius the Great. W III and IV w. ethnic riots, economic and religious activities contributed to the gradual decline of the city. From the 4th c. bishop of Alexandria, most often representing the monophysical faction, he became the real ruler of Egypt and the leader of the centrifugal movements in Church and State.
The most violent riots against paganism and power in Byzantium took place during the reign of Patriarch Alexandria Cyril. W 391 r. Cyril's monks destroyed the Temple of Serapis and part of the Library of Alexandria.

The Byzantine bureaucracy was a heavy yoke for the people of the country and of Alexandria. Tax and political oppression, they caused repressions against Christians who were considered heretics, that the Egyptians favored the invasion of the Muslim Arabs (641), promising lower taxes, tolerance for the Coptic Church and just rule. When the troops of Caliph Omar entered the city, saw palaces, baths, theaters, shops and met a nationally diverse society. Alexandria quickly became a provincial center. Trade with Italy was profitable only for the Caliph in Baghdad. After the discovery of America, Mediterranean trade ceased to pay off. Under the rule of the Turks (from 1517 r.) the city fell into decline and almost turned into a village.

The era of Muhammad Ali and the times of colonialism

The rebirth of Alexandria and Egypt began after the Turkish governor of Egypt took power, Albanian Muhammad Ali, who dreaming of detachment from the Ottoman Harbor, he wanted to create economic and military power on the Nile. He began to modernize the country by building the Mahmoudia Canal connecting Alexandria with the Nile (1820). A modern port was built with the help of French engineers. Europeans began to come here, houses built on the ruins of ancient and medieval remains in the style of the end of the 19th century. The construction of the Suez Canal resulted in, that the number of inhabitants began to grow rapidly. However, in 1882 r. an uprising against the prevailing strangers broke out of Orabi Pasha (Urabi).
In response, the English bombed the facility, completely destroying his old houses. The reconstruction erased the former historical shape and made the work of archaeologists difficult.
During World War II, Alexandria was a port for the Allied fleet. Growing nationalism led to the outbreak of further anti-British riots. W 1956 r. there was a war over the Suez Canal and an attack by Franco-British-Israeli troops. W 1957 r. President Nasser ordered French and British citizens to leave Egypt and nationalized the assets of foreign companies. Most European street names and institutions disappeared almost overnight. Arabic inscriptions appeared. The centuries-old tradition of tolerance has been replaced by nationalism and xenophobia.