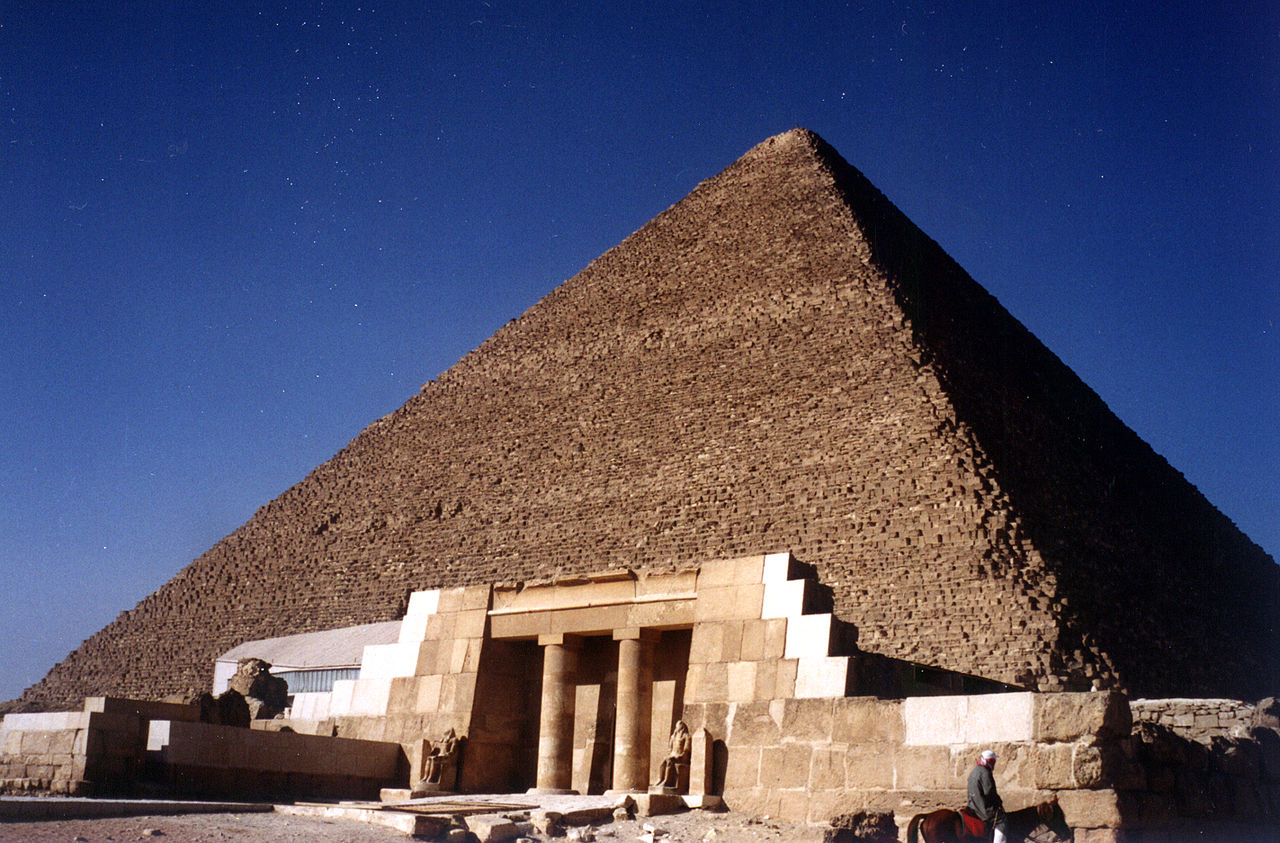 Great Pyramid of Cheops – This pyramid aroused admiration and delight from the very beginning, therefore the ancients considered it the most important of the wonders of the world.
It was built by order of the 4th Dynasty Pharaoh – Chufu (Cheops), son of Snofru and queen Hetepheres. Originally she had 146 m in height (today 137 m), the length of the sides of the base was 230 m (today 227 m), and the angle of inclination of the walls 51 ° and 50 '. It was made of stone from Mokattam and the Giza Plateau.
The stone blocks were formerly covered with a veneer made of polished limestone and granite. A similar remnant can be seen under the top of Khafre's pyramid and at the base of the Great Pyramid. The rays of the sun reflected in the polished panels produced an unusual visual effect. The pyramid shone like a torch. In the Middle Ages, the cladding was peeled off, m.in. by Arabs building Cairo. This revealed the internal structure, consisting of countless stone steps, approx. 1,5 m.
The entrance to the interior is on the north side, at the height of the sixth layer of stone. The original entry hole was slightly above this point (20 m above ground level). The entrance currently in use was forged by the Caliph al Ma'mun, son of the famous Harun al-Rashid, which he had hoped, that he will find treasures inside. Later they were covered with a stone slab. First you go down the long one, down the low corridor to the fork. One leg leads to the underground chamber (not available to visitors), the other, however, about height 1,6 m, leads slightly uphill (ascending corridor). Po 36 m reaches the high (1,75 m) horizontal corridor of length 35 m and him to the chamber, wrongly known as the Queen's Chamber. It is only partially completed, and its ventilation shaft runs towards the star Sirius. Somewhere in this pane there is supposedly a so-called. The Chamber of Secrets, which serious scholars are silent about. Usually, most visitors head to the Grand Gallery (47 m in length and 8,5 has width), the last corridor in front of the king's burial chamber after the change of plans for the construction of the corridor. The so-called. false vault, consisting of sliding plates more and more horizontal. Below the wooden platform is a stone ramp for transporting the sarcophagus. At the top of the gable wall at the highest end of the gallery there is an opening leading to the lowest of the five relief chambers, which was built with 43 granite monoliths weighing 40-70 t each. Graffiti mentioning Khufu's name have been found here, made in red ink by one of the ancient builders.
From the Grand Gallery, you enter the burial chamber proper through a low vestibule, known as the King's Chamber (5,2 me and 10,8 m i 5,8 m in height). The walls, the ceiling and floor are made of beautifully worked and polished red granite. The ceiling is formed by nine monolithic weight plates 50 t each (some of them cracked). In the western part there is a broken sarcophagus without a cover - it was put in before the ceiling was laid. The so-called blindly ended run out of the room. Ventilation ducts directed towards the Alpha Draconis and the star in the Orion Belt. The pyramid was probably looted in the First Intermediate Period. It's hot and stuffy inside. It is not possible to get into the sloping corridor (ok. 100 m) to the Unfinished Chamber, the ground under the pyramid carved in solid rock.
There are three satellite pyramids near the Great Pyramid, also known as the Queen's Pyramids, adjoining small chapels. The furthest northward belonged to the Pharaoh's first wife and sister – Meretites, middle perhaps to Djedefre's mother (Redżedefa), Khufu's successors, and the south to Henutsen, mother Chafre. Recently, the remains of a destroyed fourth satellite pyramid with a pyramidion were discovered between the Great Pyramid and the others. Northeast of the Meretites pyramid, the American George Reisner accidentally found in 1925 r. funerary shaft with the sarcophagus of Queen Hetepheres, matki Chufu, whose grave at her husband's pyramid, Snofru, plundered while her son was still alive - he ordered the preserved items to be moved near his pyramid Discovered grave gifts (furniture, jewellery) is kept by the Cairo Museum. In the vicinity of the queens' pyramids, you can also see the tombs of dignitaries, like Kara and his son Idu, or Khufu's son named Chaef-Khufu, Chafre's wife and at the same time the daughter of Hetepheres -Meresanch. To the west and south of the pyramid you can see numerous mastabas and tombs from the 4th and 5th dynasties.

South of the Great Pyramid, The Museum of Łódź is located in the beige pavilion near the mastab cluster, where the found solar barge was exhibited. W XIX w. three underground chambers with cult boats were discovered near the monument, in which, according to Egyptian beliefs, the soul of the pharaoh-god along with Amon-Re made a journey to the afterlife. W 1954 r. cedar boards were excavated (1200 pieces of wood), from which by 14 years Hagg Ahmed Yusuf was assembling a boat connected by ropes and wooden pegs. It is not known, was it a real boat (no sail), or just a cult barge.

From the lower mortuary temple of the pyramid, located under the buildings of the village of Nazlat al-Samman (part of Cairo today), only ruins remained during the period of the Middle Kingdom. The mortuary temple stood east of the pyramid. Currently, only the foundations and remains of the basalt floor of the courtyard remain. On the south side of the pyramid you can see the restored portico of Sheshemnefer's family tomb (could. May / Beg. VI Dynasty).

Little is known about the creator of the largest pyramid, synu Snofru i Hetepheres. There were conflicting opinions about the ruler and his long reign, which is provided by the not always reliable Herodotus. According to him, it was a hated tyrant, with a whip, driving the workers to work on the pyramid. The Greek wrote about inhuman labor 100 thousand. men, who by 20 years they have transported 2,3 min stone blocks. Modern scientists have completely rejected this tale, and during archaeological research it was established, that no more than approx. 2 thousand. skilled artisans and several thousand seasonal workers, called to work during the flood of the Nile. Others took the Pharaoh's name as a powerful spell and carved it on scarabs and amulets. The cult of the pharaoh, lasting for many years after his death, it clearly testifies to its greatness. He also handed over a strong enough state to his heir, that this one could have built a pyramid almost as large as its predecessor.