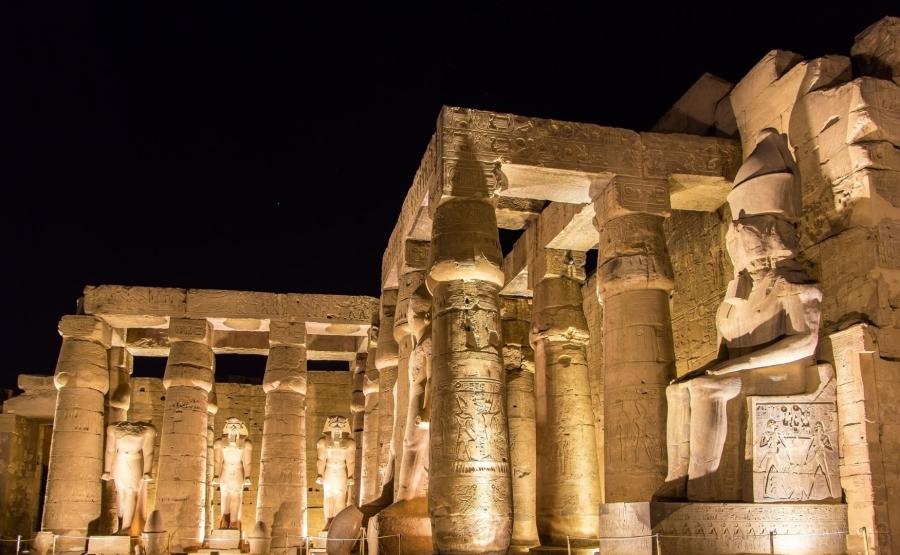 When Thotmes III took the throne, he ordered at Deir el-Bahari (Dair al Bahri) erect a terraced temple that serves as the Holy Horizon (Dżeser-Achet) for the sacred barge.
During the twentieth dynasty, it disappeared under stones falling from a cliff, the ruins were treated as a quarry, and in Christian times, they became a burial place. During work on the temple of Hatshepsut, which from 1961 r. conducted by Polish archaeologists and conservators, discovered (in years 1961-1962) temple of Thotmes III situated next to the temple of Hatshepsut. The building, modeled on earlier structures in the valley, was erected under the supervision of the vizier Rechmire at the end of the king's reign and dedicated to Amon-Rc. It consisted of terraces, ramps and the great hypostyle hall, whose ceiling was supported 76 16-side columns i 12 32-side columns. There was Amon's barge hall and a sanctuary under the cliff. The building took over the role of the Hatshepsut temple during the Beautiful Valley Festival.

Many royal tombs from the New Kingdom were plundered by robbers. Some were profaned shortly after closing, others during the economic crisis of the XX-XXI dynasty. During the reign of Siamon and the high priest Pinodjem II (X w. p.n.e.) the priests decided to keep at least the royal mummies from destruction. They took them from their original burial sites, deprived most of the grave gifts and hid in a secret hiding place in a rock crevice south of the temple of Mentuhotep. This is how the tomb-hiding place was created, called DB320 by Egyptologists (Ad-Dajr al-Bahri nr 320). mummy (in number 40) They remained hidden until the second half of the 19th century., when they found them (apparently in 1875 r.) inhabitants of a nearby village. They had quietly sold jewelry and small items over the years. The monuments appearing on the black market attracted Gaston Maspero's attention, the director of the Egyptian Antiquities Service, which in 1881 r. decided to look for the source of their origin. Secret first, and then an open investigation resulted in the detection of the robbers. The result was the finding of the mummies of Egypt's greatest monarchs: Ramesses II and his father Amenhotep I, Thotmes I and Thotmes III and Ramesses III The most important private tombs in Ad-Deir al-Bahri are the rock tomb of Maketre (XII dynastia) and the tomb of Senenmut (TT353) at the necropolis of officials.

Halfway between the Dajr al-Bahri and the necropolis of dignitaries, there is a graveyard known as the Tombs of Asasif. Archaeologists work here, hence most of the facilities are not available to visitors.
The necropolis includes dozens of graves of private persons and dignitaries, mainly from the period of the Middle and New Kingdom (35 funerary chapels from the eighteenth dynasty) and the Late Period (25 26-dynasty), when the pharaohs of Nubia ruled in Thebes. Tickets are bought at the gate to the Hatshepsut temple (20 EGP).
Usually, the tomb of Pabasa from the XXVI dynasty is open. It resembles the tombs in Saqqara from the Old Kingdom, because the Saic dynasty referred to the former glory of Egypt. A massive gate leads to a pillared courtyard with hunting scenes, fishing and viticulture. In the vestibule there are reliefs depicting the funeral of the owner and his pilgrimage to the temple in Abydos. A long corridor leads to underground halls and galleries to the burial chamber.