Egyptian Museum in Cairo – The facility is located in the northern part of Midan Tahrir. At the time of opening, at the beginning of the 20th century, was one of the most modern museums in the world. Today a museum without air conditioning, besieged by visitors, with an excess of badly described monuments and an opaque exhibition structure, it is a tiresome juggernaut even for lovers of ancient Egypt.
The idea of ​​establishing the Egyptian Museum in Cairo was born in 1835 r., when the Kedyw Mohammed Ali decided to end the looting of monuments with impunity. On the initiative of August Mariette, St. 1858 r. the Service of Antiquities was established; the scientist became her boss, and then created the nucleus of the future Egyptian Museum in the Bulaq district. He spent the rest of his life implementing the idea of ​​a museum in the city center, which began to take shape after the flood in the Bulaq district, when some of the collected monuments were lost.
W 1902 r. a new building designed by Marcel Dourgoon was put into use.
The museum collects past 120 thousand. exhibits, most of which are hidden in the cavernous, underground warehouses. You need to allocate approx. 6 at. 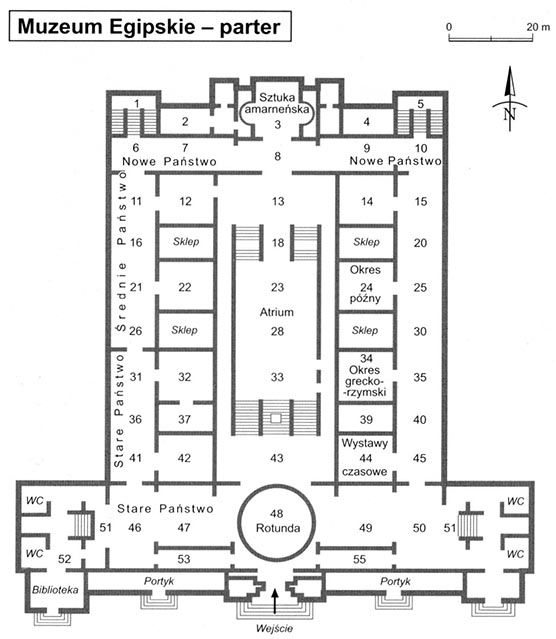 The museum's collections are arranged in chronological order – it was so convenient at the beginning of the existence of the facility, and today it is crowded and some new collections are squeezed into every free space. Usually, the tour starts with a rotunda; then go left to the monuments of the Old Kingdom, then the Middle and New Kingdom, see the Amarna Gallery and again the monuments of the New Kingdom in the atrium.
Upon entering the museum (if you want to visit in chronological order) you should go to room no 43 (straight), where the oldest monuments from the history of Egypt are exhibited – from the Predynastic and Early Dynastic Periods (4000-2650 p.n.e.).

This is one of the oldest examples of full-size Egyptian sculpture, depicting the ruler. In room no 47 there are the famous slate triads: depicting Menkaure with the goddess Hathor and the personification of the Nomes of Upper Egypt (ok. 2949-2472 p.n.e.) and the head of Pharaoh Userkaf (ok. 2465-2458 p.n.e.). There are also numerous figurines of Egyptians (Giza; XXIV-XXIII w. p.n.e.). In room no 42 a statue of the pharaoh Khafre attracts attention (diorite; ok. 2520-2494 p.n.e.) Chafre statue (Chefrena) found in the lower mortuary temple in Giza depicts the ruler sitting motionless on his throne. The artist carved it completely symmetrically (except for the hands), in a state of timeless youth and without any individual characteristics. He created the type of absolute ruler, more god than man, who is guarded by Horus in the form of a falcon, the head of the pharaoh with his wings. In room no 32 the statues of Rahotep and Nofret from the mastaba in Meidum should not be missed (ok. 2575-2551 p.n.e.), the famous Meidum geese (XXVI w. p.n.e.), as well as the copper plate statues of Pepi I and Merenre (XXIII w. p.n.e.). The statues of Pepi I and his son made of copper sheet are exceptional monuments, which only miraculously survived. The sheet was mounted on a wooden core. Room no 37 collects items found in the tomb of Queen Hetepheres, matki Chufu (Cheopsa), King Snofru's wife (ok. 2575-2551 p.n.e.). You can see a small statue of Khufu here (ok. 2551-2528 p.n.e.), the only image of the creator of the Great Pyramid.

Monuments related to the art of the Middle Kingdom can be seen in room no 32. In room no 22 statues of rulers were placed, like Senuseret I. (limestone), cedar wood figurine and the Osirian pillar of Senuseret I from al-Liszt (ok. 1964—1929 p.n.e.). In room no 16 the famous black sphinxes of Tanis stand, with the face of a young Amenemhat III, double statue of Amenemhat as the god of the Nile and black granite statue of the same pharaoh (ok. 1824—1792 p.n.e.). The so-called. the pessimistic statue of Amenemhat has the lined face of a tired man. The dropped corners of the mouth testify to the bitter wisdom acquired over the years of exercising power. In room no 11 there is a statue of ka Hora, rulers of Dynasty XIII (18th-1st half. XVII w. p.n.e.).

The art of the New Kingdom is very rich and only the most important monuments are exhibited in the museum halls. The collections from the beginning of this period are already in room no 11: are statues and sphinxes associated with Queen Hatshepsut (ok. 1479-1458 p.n.e.) from her temple at Dajr al-Bahri (Deir el-Bahari).

The yellow sandstone sphinx with the ruler's face shows her feminine charm, despite the spiced Pharaoh's goatee. There are also sculptures by Thotmes III. In room no 12 black granite statues were collected, depicting Thotmes IV with his mother Tia (ok. 1397-1387 p.n.e.) or a statue of a sitting person, the slightly smiling Thotmes III (ok. 1479-1425 p.n.e.), whose face resembles that of a pretty girl.

Behind the painted chapel of Thotmes III for Hathor of Dajr al-Bahri (Deir el-Bahari) there is a statue of Hathor in the form of a cow. Another curiosity is the head of Amenhotep II found in Karnak, wearing a blue chepres crown. The hall also exhibits the most famous scenes from the trip to the land of Pound from the Temple of Hatshepsut of Dajr al-Bahri.