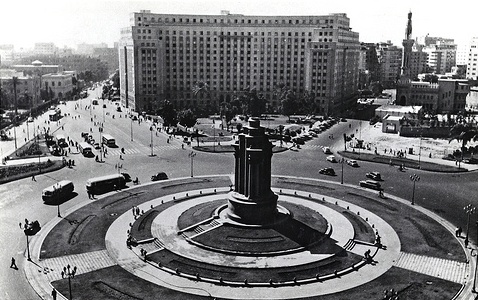 Cairo and its surroundings – Main attractions

• The Egyptian Museum – At the time of opening, at the beginning of the 20th century, the facility was one of the most modern museums in the world. The idea of ​​its establishment was born in 1835 r., when Mohammed Ali, on the advice of the archaeologist August Mariette, decided to end the looting of monuments with impunity. Today it collects over 120 thousand. exhibits, including mummies of the pharaohs and the finest Egyptian jewelry.

• Great Pyramids – When Napoleon saw the pyramids he said: “Forty centuries are looking at you from the top of these buildings”. This miracle of the ancient and modern world dates back to the reign of Khufu, called from the Greek Cheops, Chafre and Menkaure.

• North Saqqara – This is where the oldest and historically most important part of the Memphis necropolis is located. The deceased were buried there continuously from the times of the first dynasties to almost the end of antiquity. During the New Kingdom, Saqqara was a burial ground for sacred animals, especially in Ptolemaic times, when the cult of animals was experiencing a renaissance.

Egyptian capital, Cairo (Cairo, arab. Al-Kahira, Misr el-Qahira), popularly known as Misr el-Qahira, because it is almost all of Egypt – po arabsku el-Misr. It is not known, how many inhabitants actually, because it is growing very dynamically (it is believed, that approx. 20 million people, and another 5 min commutes to work every day). More suburbs are emerging around the city, where the inhabitants of the countryside come in search of work: one family member with a job and a home is enough, that a half-related village would come down to it.
The largest city in Africa is at the same time the political and cultural center of the Arab world and a tourist center of international importance.

It is also a "gate to the East", the point of contact between Christianity and Islam, Western civilization and Muslim civilization. The city lies for the most part on the right bank of the Nile, ok. 20 km south of the place, where the river splits into two arms: Rosettę i Damiettę.

On the eastern side they are surrounded by the Moqattam hills, behind which is the Eastern Desert. From the south, the districts of Old Cairo and the suburb of Ma'adi are adjacent. In recent years, the capital has expanded more and more to the west, annexing once separate districts, like Giza and Doqqi, and further towards the Libyan Desert (Western), all the way beyond the pyramids.

Getting to know Cairo in detail is a virtually impossible intention, because the city is not one organism and combines so many different and different centers, that just identifying them is very time consuming.

Most tourists usually visit only the Europeanized center of Cairo, where buildings from the turn of the 19th and 20th centuries are located, crowds of people move along the sidewalks, and the streets are squeezed with a hose of cars alternating with donkeys.

Here you can most often find officials in suits, and even women without traditional scarves covering their hair.

The center of this area is Midan Tahrir (Freedom Square), the main transport hub of the city, where the Egyptian Museum is located (tooth. further). Do XIX w. it was a muddy plain, inundated by the waters of the Nile until the time of the Kedyv Ismail, wishing to create Paris on the Nile. The ruler built a palace called Qasr al-Aini in the center of the new district, Qasr al-Nil (Nile Castle), and the square in front of it was called Midan al-Ismaileyya. In British times, the command of the occupation army was located here, which in 1947 r. she left the buildings damaged by soldiers, that they were demolished almost immediately. W 1954 r. the square was given its current name. Characteristic buildings stand around the square. The renovated Nile Hilton skyscraper rises south of the Egyptian Museum, at the site of the former Qasr al-Nil. It's the first (1959) from a series of modern hotels built in Cairo. Right behind it you can see the headquarters of the Arab League secretariat, light brown building from the lat 60. XX w. designed by the Egyptian architect Mahmoud Riad. Next is the new Helnan Shepard Hotel, behind which is the entrance to the Tahrir Bridge, and the building of the Ministry of Foreign Affairs in the former palace of Kedyw Abbas Ielmi's sister. Hence, it is close to the Mosque of Omar Makram, where funeral ceremonies of important people usually take place. Shaikh Omar Makram was the national leader during the Napoleonic invasion of Egypt (XVIII w.); from 2003 r. his monument stands in the square. The southern frontage of the square is occupied by a gloomy building, Mugamma, seat of the Ministry of the Interior, Health and Education and the city governor. Next to it is the campus of the American University in Cairo (building in the Islamic style, first the residence of an Egyptian aristocrat, then a cigarette factory), one of the most important and prolific institutions researching the history and art of Egypt. The wealthiest Egyptians study here, and American and European scholarship holders come to lectures.