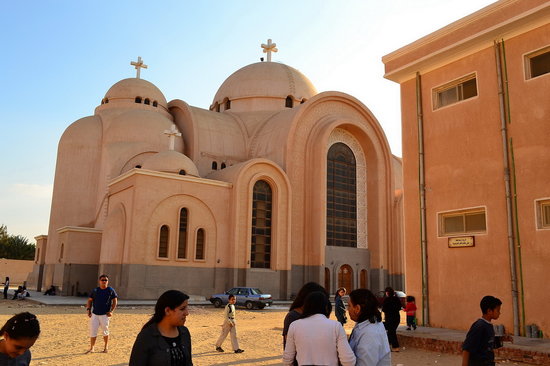 Wadi an-Natrun (Wadi Natrun, Wadi an-Natrun) it is not an oasis in the full sense of the word. It is located right next to the Desert Road (Desert Road) from Cairo to Alexandria, almost on the opposite side of the exit to the new town of Sadat City, where in years 50. XX w. large-scale remediation of the desert began.
Wadi an-Natrun is the cradle of monasticism, which appeared here in the 4th century when several monasteries were built (st. Anthony, st. Pawia Hermit and St.. Catherine), which had a huge influence on the development and shape of Christianity. During Roman times, Christians were persecuted many times, and especially about a year 300, when there are many followers, fearing death, fled from the cities to the desert. About 330 r. Wadi an-Natrun has become a well-known and important center of Christianity and a destination for pious pilgrimages. Approx. 50 monasteries. They were often plundered by desert Berbers (especially in the 9th century), but after each invasion, both the churches were rebuilt, as well as the whole. Pilgrims came to them not only, to pray. Many, custom of the ancient Egyptians, it wished to rest here after death, as a result, monasteries surrounded vast necropolises. Until now, they have only survived 4 monastery, respected by the Copts and receiving numerous pilgrimages.
Each of the monasteries was built similarly: fortress surrounded by a defensive wall with a watchtower (qasr) and a drawbridge, with one or two churches inside, warehouses, refectory, kitchen, bakery and monks' cells. A lot of buildings date back to the 19th and 20th centuries.
The visit to the monasteries is best planned as a day trip from Cairo or Alexandria, however, you have to rent a car, unless you are participating in an organized trip (rarely). The visiting hours vary depending on the monastery, moreover, there are additional fasts and periods of mortification for monks: 45 days before Christmas, 3 days in memory of Jonah's stay in the whale's belly, 55 days before Lent, fasting from Pentecost to 12 July, 15 days in memory of the Assumption of the Blessed Virgin Mary (7-22 of August). Only Deir Amba Bishoi is open all year round (Dajr Anba Biszwi, Dayr Under BishwT, Deir Amba Bshoi, Deir Anba Bshoi, dim. deir amba biszoi).
This monastery (codz. winter 7.00-18.00, in the summer 7.00-20.00) lies approx. kilometer southeast of Deir el-Suryani. It was founded at the end of the 4th century., after the death of the hermit St.. Bishwie (417 r.), who was to be born in 320 r. and was one of the first hermits in Wadi an-Natrun. Tradition proclaims, that his mother had received a message from an angel before she was born, that her child was chosen by God. Many legends have survived about the hermit's life. After his death, his decaying body was buried in the local church alongside other hermits. Currently, the relics of St.. Bishwie's are in a precious casket, a 17 of June, covered with a linen cover with an embroidered imaginary portrait of a hermit, are carried in a procession around the church. St.. Biszwiego is the oldest of the preserved buildings in the oasis. It has three presbyteries dating back to IV, IX and X w. Monastery chapels are also situated in the tower (ok. XIV w.). The tower and the church are connected by a wooden drawbridge.
Within the monastery there is a well from the 5th century. The monastery is one of the residences of the Alexandrian Patriarch,
Szenuda III, who was in exile here during the reign of President Sadat (the building farthest from the entrance to the monastery with several domes). Most of the Coptic patriarchs are descended from the Wadi an-Natrun monks. Today, approx. 150 monks and novices. Photographs of the monastery often appear in tourist folders as a showcase of Wadi an-Natrun.
In the area of ​​Wadi an-Natrun you can also see monasteries: Deir es-Suryani (Deir el-suryan, Dajr as-Surjani, Dayr as-SuryanT “Syrians”), founded in the 6th century, with the church of el-Adra (dedicated to the Blessed Virgin Mary), erected approx. 645 r. and rebuilt in 980 r., in which wonderful murals and old icons are noteworthy, Says Abu Makar (Deir Abu Maqar), monastery of St.. Makarego, oraz Deir el-Baramus (in English. the Coptic "monastery of the Romans”) from 4 churches, the most magnificent of which bears the call of the Blessed Virgin Mary, and it is decorated with a beautiful painted iconostasis. The monks here have very strict rules.
About 50 km northwest of Wadi an-Natrun, driving the road to the monastery of St.. Menasa, is located approx 1500 pustelni (Kelya, from Latin cella – „That”), established, among others. by St.. Men (V — VII w.). The hermitages were scattered between Nitria and Wadi an-Natrun. Most of the hermitage were abandoned in the 9th century. after the attacks of desert robbers.