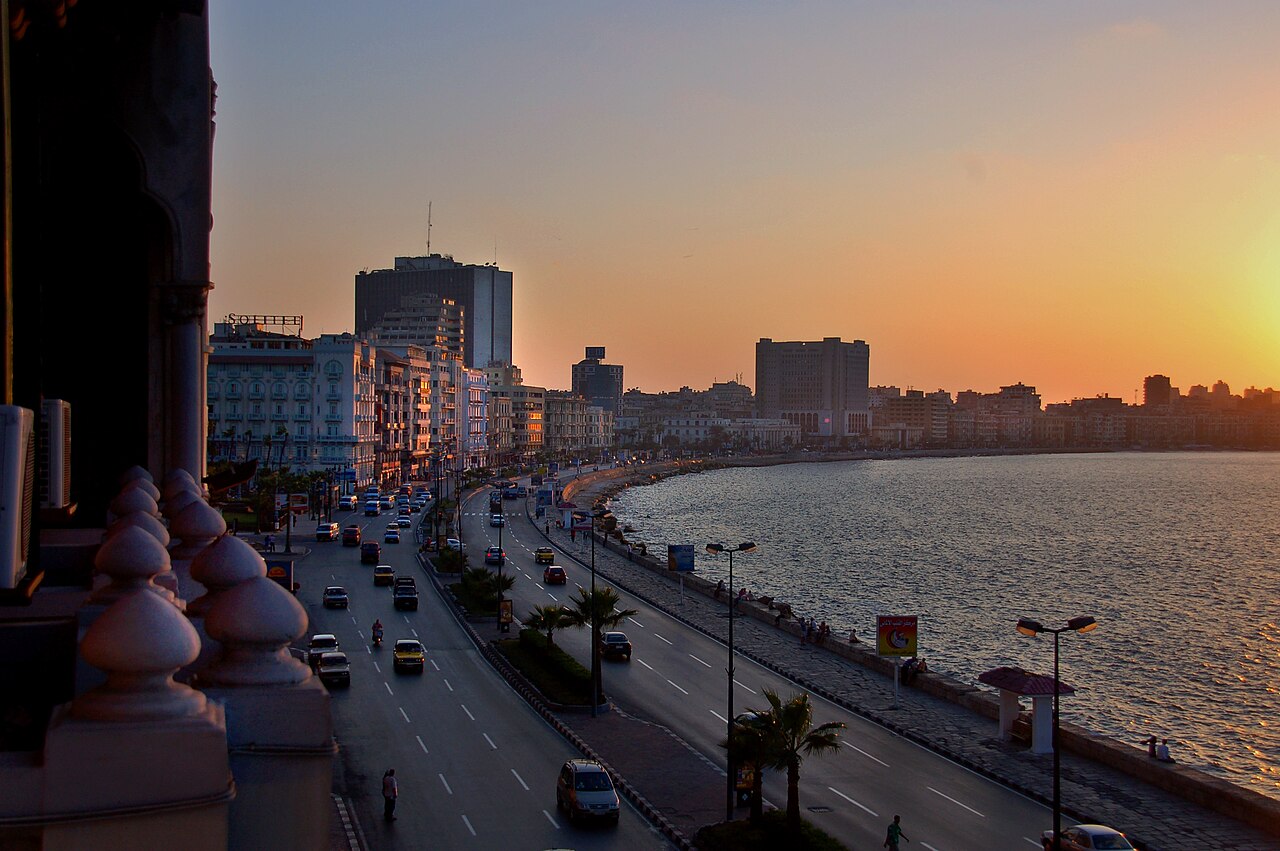 Parallel to the Alexandria waterfront, the Corniche stretches from Fort Kaitbeja to Montazah Palace., a promenade separating tenement houses from the city's beaches: Shatbi, Ibrahimija, Kleopatra, Rushdi, Stanley, Glym, San Stefano, al-Raml, Sidi Biszr, Asafra, Mandara, Montazah in Maamura (east of Alexandria, near the town of Abu Kir – the ancient Kanopos). Most of the sandy stretches are very crowded.
There are no undressed women on them – girls bathe in dresses and headscarves. An avant-garde variation of the beachwear is a tight-fitting black outfit with a short skirt. There are three interesting museums nearby: Royal Jewelery Museum (Glym), Musuem of Modern Art (San Stefano) and the Montazah palace with gardens, and also the necropolis of Shatbi.

The oldest necropolis of Alexandria (Chatby, el-Shatbi; III w. p.n.e.) adjoins the Eastern Port. A tomb open to the public (undecorated) mimics a Greek house with an entrance, frontage and internal room. It is similar to the tombs of the Anfushi necropolis. The entrance leads to two corridors filled with loculi, placed one above the other. The open courtyard leads to the vestibule and the main burial chamber with two sarcophagi with the appearance of beds.

Three blocks from the Corniche and halfway between Glym and San Stefano, the Royal Jewelery Museum is the home of Princess Fatima az-Zahar (1903-1983), granddaughter of Muhammad Ali. The decor is full of ostentation, characteristic of the declining years of the dynasty's reign.

Incredibly, the Museum of Contemporary Art (Shari 'Mahmoud Said Pasha) located in a two-story villa that once belonged to the painter Mahmoud Said (1897-1964), who was the first Egyptian to receive a state award for his achievements. The first floor houses the works of artists who worked in the 20th century.

On a peninsula extending out to sea, ok. 18 km from the center, among the wonderful greenery of gardens with an area 46 ha rises the fairytale Montazah Palace. The complex is accessed through the gate opposite the Montazah Sheraton Hotel.
In the park of Kedyw Abbas II c 1892 r. built an amazing Florentine-Turkish palace, then called Salamlek. W 1932 r. King Fuad built a great palace and named it Haramlik, and his son, Faruk commissioned the construction of a fairy-tale bridge. The residence was another summer residence of the last king of Egypt – Faruka.

Contemporary Abu Kir (Abuqir, ancient. Canopus) above the bay of the same name is distant from 19 km east of Alexandria. Little is left of the former famous holy city on the Canopic Nile. Still in the 5th century. p.n.e. it was a flourishing port described by Herodotus. After the founding of Alexandria, the city systematically fell into decline, as evidenced by Strabo's account of the first century. Tectonic movements made, that it slowly began to collapse. For many centuries, news of Canopos and Herakleon circulated, but the lost city was not found, which disappeared during the unimaginable defeat of approx. VIII w. Only in 1999 r. a team of French and Egyptian underwater archaeologists and divers led by Franck Goddio, equipped with the latest equipment, she explained the mystery. Researchers found sunken ruins with approx. 2,5 thousand. years – the city was flooded during the seismic events.